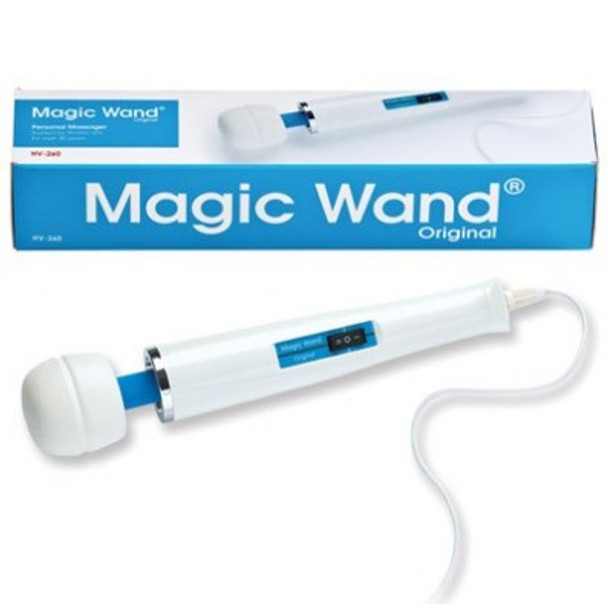 We don't mean to brag, but the Hitachi Magic Wand is kind of a big deal around here. Some call it the Hitachi, and some call it the Magic Wand Original but we just call it MAGIC. Brought to you by the very same Japanese tech giant known for high-performance Japanese racing engines, it's no surprise this iconic toy is also built for speed. It's been included among the most iconic inventions of the twentieth century, dubbed the “little black dress” of massagers, and remains the best-selling massage wand of all time.

This Magic Wand's trusty six-foot cord* plugs into the wall for continuous use and an OMG-worthy 6,000 RPM top speed. One of the few sex toys that's actually FDA registered as a medical device, its deep and penetrating vibrations make short work of massaging aching muscles - along with everything else! For clitoral stimulation, there really is no comparison. With vibes so strong you can leave your undies on, you can use this wand to orgasm through clothing, blankets and quite possibly an inflatable sumo suit! (We recommend new users place a pillow between themselves and the wand to dampen the ultra-intense sensations.)

Ready for a long-term commitment? The Magic Wand comes with 1-year warranty but our customers report their wands still work beautifully even after a decade of heavy use - longer than many relationships. And, after decades of rave reviews for its reliable satisfaction and durability, the Magic Wand was given a gentle update in 2013. A sturdier construction and a few new components to make it even more durable!

*If you prefer a cordless experience, the rechargeable Hitachi Magic Wand Unplugged offers the same stimulating power without the plug-in.

"In the world of vibrators, the Magic Wand is legendary—a veritable Excalibur wielded by many a thrill-seeking Lady of the Lake for top-notch clit stimulation." - Bust.com

"The “Cadillac” of all vibrators, not just wands." - Sheknows.com

"It's basically a fairy godmother for your clit." - Women's Health Magazine

Magic Wand’s story begins in 1968, a full year before we landed on the moon and about six months before bell bottoms were trendy the FIRST time. This is when the Magic Wand® – the ORIGINAL Personal Massager – was first introduced. No one expected that this unassuming device would soon become one of the world’s most recognizable products. Today, the Magic Wand Original shares the spotlight with two equally impressive models: Magic Wand Plus, a corded, variable speed massager; and Magic Wand Rechargeable, our cordless, multi-function device. Every product that bears the Magic Wand name features the legendary power that took the world by storm more than half a century ago.

MSRP:
Now: $16.50
Was:
Pop Your Top! Your wand may be wonderful, but when it's time to take your relationship deeper our G-Spotter Magic Wand Attachment has got you both covered! Just slip this sleeve over the head of your...

MSRP:
Now: $129.95
Was:
Guaranteed Orgasm Delivery. We know how much you love your Hitachi Magic Wand, but don't you think it might be time to cut the cord? After 30 years in the making, the new Hitachi Magic Wand -...

Voodoo Hummer Wand Attachment For Him

MSRP:
Now: $16.99
Was:
Get That Wanderlust! If you're a penis-owning person, have you ever wondered what HER Magic Wand can do for you? As it turns out, a lot more than you thought: Introducing the Voodoo Hummer Wand...

MSRP:
Now: $129.95
Was:
Guaranteed Orgasm Delivery. We know how much you love your Hitachi Magic Wand, but don't you think it might be time to cut the cord? After 30 years in the making, the new Hitachi Magic Wand -...

MSRP: $6.00
Now: $5.99
Was:
Just the Basics! Cheaper than a loaded Frappuccino and more powerful than a Pocket Rocket, our Basic Chrome Bullet is the most fun you can have for $5.99.! This Slim Teardrop-Shaped Bullet stimulator...

MSRP:
Now: $22.99
Was:
Life May Not Be Easy, But Your Orgasms Should Be! Does getting off during sex require a little extra effort, as in, doing the two-finger tango? Paddling the pink canoe? Flicking the bean? You're not...